Back in the late 1970's and early 80's, if you wanted a lens with a wider angle of view than, say 24mm, you had to look to the original equipment manufacturers such as Canon, Nikon, Minolta, Olympus and such. Only they had the technical ability and financial resources to provide such lenses. Most people did not require such lenses, so the main audience was with the professional photographers. Since they earned money from providing new and exciting images, the cost of buying expensive lenses could be justified.

Vivitar Corporation was not a manufacturer but a re-brander of other manufacturer's equipment. Vivitar's people would spec a product and then shop the orient for someone to build the product. Sound familiar with what goes on today? Same thing. 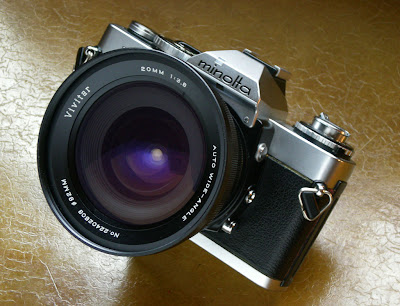 The good folk at Vivitar knew that hobbyists love all things new and denied to them. A really wide-angle lens that was affordable was something lacking in the general market. Never mind how sharp it was, what people wanted was just the ability to get the whole Grand Canyon in one shot.

The result in this case was a fabulous 20mm f/3.8 optic. Much wider than a 28mm or 24mm lens (things get geometrically wider with a couple millimeter's drop) and priced at only $81 out of a New York City camera store in 1976! That's over a $300 optic in today's money (still not bad).

As you can see, the lens is not compact. That front end takes 82mm filters and forget about a lens shade. The OEMs could hone the optical formulas to produce the same angle of view lenses without the bulk. Vivitar opted for economy, hence the bulk of glass to bend the light.

I love this lens for a variety of reasons, but mostly for its ability to focus down from infinity to under 6 inches. Super wide-angle view with close-up abilities. Wow. That's what photography used to be about; happy hobbyists exploring the world around them with fresh perspectives.

I got this guy for less than $50 at an ailing camera store. It was a Minolta MC/MD mount type, not suited for any Maxxum or Sony autofocus camera use. I guess manual focus  = bad, autofocus = good. Whatever, all the better for me and my collecting mania.

This well-built lens is going on my Minolta XD-11 with some fresh Kodak film inside. Maybe I'll post a few examples soon.
Posted by Jim Eckberg at 7:38 AM