A classified ad listed two vintage cameras for sale for a very low price. I opened the photo of the two and saw a Honeywell Electric Eye 35R (really a Mamiya EE) rangefinder and a Heiland Premiere. The first camera dates from around the early 1960's, while the little Premiere a bit earlier.

After meeting the owner, I was told that both cameras belonged to his father, a Honeywell employee. His dad picked both of them up at the company store in St. Paul, MN. We had a nice chat by our vehicles. A short one, as most conversations in sub-zero weather normally are. My examination of the cameras was only momentary. At home, I cleaned and inspected my new finds.

The Mamiya is nice, it's the camera that I thought I most wanted as I had not heard of a Heiland Premiere. But I found that the more I handled each, the Premiere was fast becoming a more comfortable instrument in my hands. I had no idea about this camera, and, ta-da, the internet provided some insights. 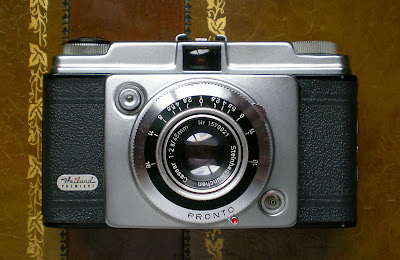 Turns our the Heiland Premiere was really a Dacora Dignette; a direct viewfinder camera made by the Dacora-Kamerawork in Reutlingen, Germany. Teutonic sounding enough for you, eh? From other readings, it appears the Dacora was one of those many "me-to" camera manufacturers destined to die-out as the Japanese photo juggernaut gained speed. Too bad, it's really not a bad little shooter.

Even fifty years later, the leather is good and the metal surfaces are still smooth and shiny.  You set everything with the camera: focus, shutter speed and lens opening. Without a meter or rangefinder, it's guess your best at everything.

The lens is a 45mm f/2.8 Cassel from Steinheil Munchen. No idea yet if it's any good, I'll have to finish the roll inside someday. It's hard to see, but the lens is a tiny button of a thing, about the size of your thumb. Actually, the whole camera is very compact and can easily fit in your pocket. Given that miniature form factor, it's good that the shutter release is on the front bezel of the camera. A much better, more natural spot for your fingers. Top shutter speed is 1/250th of a second. You only get speeds down to 1/30th and then the "B" setting. No matter. This is obviously a camera made for shooting outdoors in bright Bavarian sunshine. 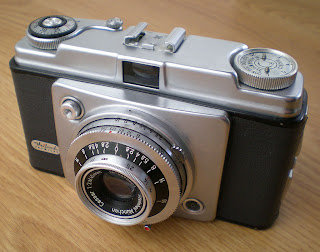 The only main detraction in use is the viewfinder. Unless you actually press your eyeball on the finder's glass itself, you can't get close enough to compose within the whole frame. I guess the intention was just to center everything and snap away.

I really like the Dignette. There are few things as elegantly simple as this instrument. There isn't a wasted millimeter or feature on the unit. Perhaps in its day it may not have had the added design styling as more expensive versions or of those from other manufacturers. Somehow, the Dignette appears almost modern in its looks. No, take a gander at it. Without the wind lever, you could almost, almost pass this thing off for an older digital camera (if such a thing exists).

Oddly enough, I keep the Dignette close by my desk. Like a metalic stress ball, I wind and snap it during my periods of contemplation. The also-ran of my dual camera purchase has become a favorite to me. It's a Honey(well) of a find.
Posted by Jim Eckberg at 8:50 PM