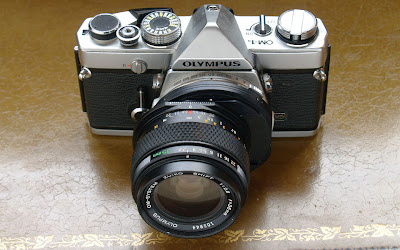 Before Photoshop, if an image captured on film needed to be corrected, you had two options: fix it in the darkroom or shoot it correctly right away. The darkroom offered many tools to alter images but had many limitations, too. Photographers usually opted to remove doing work later by doing things right first.

One common challenge was shooting architectural assignments where there would be perspective control problems. As you stood in front of a building and shot photos, you would get unappealing convergences of lines that would show up as a distortion of the true state of the structure. Sure, in the darkroom you could easily tilt the easel with it's photo paper under the enlarger to correct for a tall building looking like it was falling over. But in doing that process, you could also converge the edges of your photo so that the borders would creep into your usable image area.

View camera users had an ample 4 x 5-inch negative area and a flexible bellows between the film plane and lens board to twist an image around to precisely place areas of focus and correct any image distortions. The 35mm types of cameras generally did not offer this ability. Most major camera manufacturers, including Nikon, Canon, Minolta, Pentax and Olympus (and others) offered a few specialty lenses to emulate a few view camera abilities. These lenses carried designations such as PC (perspective correcting) or, more commonly, shift lenses.

I happened recently to find an example of an Olympus OM-series 35mm f/2.8 shift lens at a local camera store (we still have one in my town). The clerk assumed that since the lens had no digital abilities, it was therefore useless and let it go to me for $50.

Back in the day, say about 1979, this lens would have fetched about $290 to take home. Not too bad for an Olympus Zuiko lens? That's around $1,100 dollars in 2010 money. I did the math. Yeah, you better have had a real need for one of these lenses. Most people obviously didn't and sales of these lenses could be regarded as occasional.

Other manufacturers, particularly Nikon, had several versions of shift lenses. All shift lenses were usually wide-angle types, as most of the uses that anyone could conjure up for owning one would be used for taking snaps of buildings. Telephotos aren't much use for that purpose, and the effect of distortion control is lost on such lenses, too. 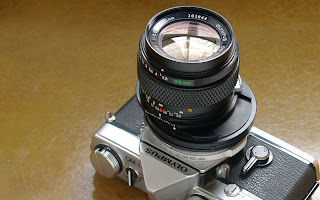 This lens is a really fine piece of optical-mechanical engineering. You can shift the whole front portion of the lens in two directions, even at once. Typically, you only need to correct for distortion in one direction. The ability to go in either direction had more to do with whether you shot vertically or horizontally than with combined effects. This shift lens does not need some kind of mechanical stop or knob to prevent the front element group from sliding around as you correct for distortions. Olympus engineers somehow made sure enough pressure would be available to keep the lens in place no matter which angle you pointed in.

All lenses cast a "circle of confusion" image area toward the film (or sensor nowadays). It's a circular area of even light distribution and equal optical sharpness. This lens had to be designed to throw a larger area of illumination so you could move the front elements around and not have a "vignetting" or darkening of the edges on your film.

The lens differed from the rest of the OM series of optics as you have to manually close the iris to meter and make sure it was closed to the shooting f/stop before you hit the shutter release. As the lens moves about in its shifting abilities, there was no way for a mechanical link to be able to connect to the exposure system. A large push-lever under the lens does this for you.

I haven't shot with this lens yet. I'm certain it will be as sharp as its other cousins in the Olympus line. As for now, I can do the same thing in a moment or so in Photoshop. Time marches on.
Posted by Jim Eckberg at 11:52 AM