Kodak Retinette IA: is this how I look?

As a collector, the thought sometimes hits you, "what was I doing in the year in which this camera was manufactured?" Kind of a perspective thing. You try to place how things where in order to gain insights on how people might have used the camera. For me, a Kodak Retinette IA camera's time period would correspond with me in diapers. Ouch. Thanks for reminding myself how old I am. Good job, Jim.

That revelation aside, the late 1950's were a golden age for camera gear. All the Japanese, German and American makers were happy supplying newly rich post-war consumers with just about anything they could throw at them. Soon the withering of brands in the coming turbulent decade would wipe out many venerable names or see them sold to vaporous holding companies. 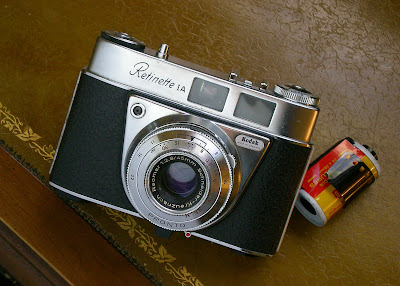 This was a good time for Kodak. Unscathed by WWII, they built up their lead in their homeland and basked in brisk sales. The Retina lines of cameras were the upper-end of the amateur market. Made by Nagel in Germany starting back in 1939 or so, the Retinas were class-act cameras, usually overpriced for the typical US family. Rather than cheapen the name Retina, they gave it a renewed sales lilt with a downward engineering emphasis on features and a new brand name: Retinette. A junior Retina.

They were great little cameras. The lenses were not as big or as fast, the guts were not as complicated with additional features. But they took fantastic photos, and were offered to consumers well within the price limits of thrifty American shoppers.

If you can find a Retinette, you'll first be surprised at the highly reflective finish on the body even after 50-years. Secondly, they feel very good in your hand. German leather from these days is different from Japanese leather. How? Um, smoother. The Japanese seem to have preferred a roughened surface for better grip, the Germans liked embossures of logos and a more gentle, velvet touch.

The major draw-back to Kodak Retinas is the Compur shutter they used. Over time, they just die. It's like they have a maximum number of clicks to go before they break. By contrast, Seikos and Copal shutters on most Japanese cameras fare much better. I'm no expert, but when I look at vintage German cameras, I tend expect two common occurrences: the shutter will be slow or not work; and/or the shutter's self-timer will not work or have helped to jam the shutter.

One last thing about 1950's cameras like the Retinette, more are in good shape than comparably-priced cameras from later decades. Why? People were very good about keeping the camera protected in its big leather case. Remember, the war had just passed and these good folk had survived a depression, too. They know how to take care of something that set them back a month's wages. No credit cards in those days, you paid cash from money you saved.
Email Post