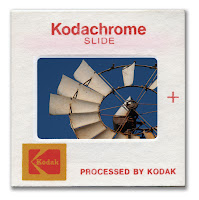 In June of 2009, Kodak announced that Kodachrome film will be discontinued. After a 74-year run, the undisputed king of color film will be gone. Negative films will continue for some time, but without this venerable slide film, silver-based photography takes one more step into memory.
Behind the headlines, know that offering Kodachrome was always a love-hate effort for Big Yellow in Rochester, NY. The film offered unsurpassed color and sharpness, but it came at the cost of a very complex, finicky processing system that involved chemistry that make everyone involved a bit nervous. The company's E-6 process film alternative, Ektachrome, never had the beautiful golden hues when viewed and couldn't match the image stability over time; but it is a far easier, less expensive film to process. Fuji uses this processing system to develop their line of slide films, too. Ektachrome and Fuji slide films will continue for a bit, but they're not the same as Kodachrome.

What Does This Mean for Camera Collectors?
At the most basic level, you should probably grab a couple rolls of Kodachrome off the shelf now, before the eBay types run up the value beyond retail. Displaying a few rolls of film of the type your film cameras used adds a colorful touch on the shelf from the mostly chrome and black cameras.

I plan to buy a few rolls of Kodachrome and shoot them through representative samples of my old 35mm film cameras. Maybe one will go through my 1966 Nikon F, another into my beloved 1976 Minolta XE-7. And just to close the book on film, I'll shoot one in my 2005 Canon EOS Elan 7, one of the last film cameras produced. In this way, I'll have undigitized evidence of the potential sharpness of the film and lenses of by-gone days.

Some people actively seek out collecting unexposed film. The draw seems to be more the packaging and not the possibility of using the film. Often, you can identify a whole era by the design of the box; it's lettering and wording.

So, good-bye Kodachrome. I'll miss ya, although I stopped shooting ya years ago. Hmm, perhaps that's at the root of the problem. If you film aficionados want to keep shooting your favorite media, keep buying the product. Otherwise, your collecting future won't come with sprocket holes.
Posted by Jim Eckberg at 7:59 AM