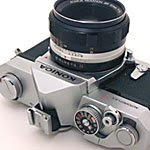 People collect all kinds of things for all kinds of reasons. Collecting cameras is no different. It’s important for you to be clear on why you’re going to collect cameras. Partly because of the enormous scope of potential collectible items available, but also to ensure that you’ll be properly positioned to continue collecting in the most pleasurable frame of mind over a longer time.

The impetus to start collecting something, anything, usually falls down along two main lines of reason. Let’s start with the least typical of the two main reasons people collect photographic equipment.

Return on Investment
Sure, you can make money finding and reselling photographic equipment. There are people who do it. It’s not as easy as you might think, though. Hence the reason not that many people go this path for collecting.

Cameras are hugely mass-produced consumer products; they have to be. Even the cream of the crop vintage film or latest digital equipment for professionals must be targeted at an audience large enough to pay for the development, manufacturing and marketing of the product. No one manufactures equipment for a hobby. Well, there are a few craftspeople that will make you a hand-made wood 4x5 view camera, but that number could probably be counted on the tips of both your hands.

Like any product, a camera has an initial purchase price and a future value. The initial purchase price (the in-the-box store price) depends (depended) on the features and quality of the instrument and the number produced. The future value, or used value, is tied to how well the quality of the camera has stood the test of time, the number of cameras still available and a more subtle quality, the “brand” value of the manufacturer. Very subtle stuff.

To be honest, if you’re collecting cameras to flip and turn a profit, particularly with older film cameras, you’re dealing with only a few brand-name companies and a very narrow range of camera bodies and lenses. You’ll more than likely be looking at anything that has the name Leica or E. Leitz on it. These cameras were the first real 35mm film cameras, and they began manufacturing models in Germany before WWII. The Teutonic mystique of this brand, with it’s imagery of hand-crafted quality and obsessive attention to details, keeps collecting cameras from this brand the most expensive, but also most assured bet to be able to sell for more over time. Know that with Leica, you’ll be trading in cameras about 40 to 50-years old. These were the golden days of Leica’s rangefinder equipment. The newer stuff, things from the ‘80’s, is usually constrained to the specially-built, limited production offerings produced for collectors of those days.

Except for a few other types of cameras, Alpas, Nikon rangefinders from the ‘50’s, and Hasselblad medium-format cameras to name a few types, collecting cameras for profit is probably not a very secure investment opportunity based on not a lot of valuable inventory.
One reason for such a select crowd of increasing value photo stuff lies in the meteoric decline of film use, which has lowered the values of ALL cameras over the last few years. And since film cameras are passing into the LP record realm of discarded technology, there are just fewer people using them to justify hoarding the best examples and offering them at a premium.
Then again, if you’re OK with collecting something with the idea that you get about the same amount or slightly more for it once you sell it after enjoying it for a bit; that’s not a bad reason. Just don’t expect to factor it in with your retirement investments.

Personal Enjoyment
Rather obvious, I know. This is where most of us live. Collecting cameras, old or new, is just another, well, hobby. Each of us for our own personal reasons collects cameras because we like it. That’s all, that’s enough. Your reasons to do it are as good as any other and you need never defend it to anyone. Enjoy the collecting and the having; the learning and the sharing. If you find you don’t enjoy collecting any longer, stop. Or start collecting for profit.

Since you won’t be in this camera-collecting mode to make money, you’ll be spending money on it. Lots of it, just like with any absorbing hobby. Know that right now. Budget for it. Pace yourself. Paypal is not your friend.

Seriously, if you don’t establish the rate at which you’ll be collecting early on, you can soon find yourself justifying regular purchases to slake your collecting zeal that begin to impact your “real world” activities. Keep it a hobby and not an obsession. Cameras last many decades after they’re built. You’ve got time on your side for this type of collecting. More on this on some other post.
Once you know you’re in it for the fun, keep it fun. If you get drawn off on another collecting tack, like moving from collecting one brand or type of camera to another, go. As with any collecting, the hunt for an elusive item is often more fun than the kill of actually acquiring it.

Email ThisBlogThis!Share to TwitterShare to FacebookShare to Pinterest
Labels: Why am I collecting this?