I bought a used Olympus Evolt E-500 DSLR camera kit a couple of years ago. Partly because I wanted to jump into a good digital camera, but mostly because I found out I could still mount vintages lenses to the camera. Wow. For a guy with a rather sizable investment in old lenses, that was a huge, huge plus. Now I could have the best of both worlds: digital capture and the ability to keep playing with well-made old optics.

The old OM lenses don't mount directly on the digital Olympus' 4/3 autofocus mount. The mounts are close, in fact I've mounted OM lens caps on the Evolt by mistake more than once. The body of the Evolt is not as thick as an OM film camera as well. What's needed is a transitional mount; something that provides the spacing distance and the appropriate coupling for the two lens systems.

You can get one of these adapters for around $20 (plus shipping) on eBay. Olympus makes a very well-made version themselves but charges about five times as much. Since I'm doing this for occasional play and not professionally, I opted for the less expensive generic version. It is designed to allow completely normal lens focusing from close-ups to infinity just like when used on a film camera. 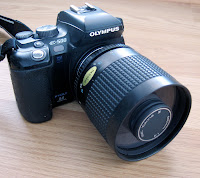 You need to know right now that things are done very manually to shoot images. The lens will not have an automatic diaphragm. You focus with the lens wide open and then close the iris down to the shooting aperture required or desired. That means the camera must be set on aperture-preferred or manual operation. Mostly, I just use aperture-preferred.  The camera selects the shutter speed as I dial the aperture open and closed. Obviously, focus is manual, these are manual lenses. Duh.

Now for the fun. The general sequence is to mount the OM lens on the adapter first and then mount both on the Evolt. This is done as it's harder to grip the small adapter ring and remove it on the body. Since the Evolt uses the 4/3 system sensor, the magnification of any vintage OM lens is doubled. A 24mm becomes a 48mm. A 135mm becomes a 270mm. And here's the fun one; a old 500mm mirror becomes a whopping 1000mm telephoto (that's a 20x magnification on a 35mm camera!) at the same aperture (a 1000mm f/8). Way cool.

So that's the combination I've been playing with. Since the aperture is fixed on the mirror lens, I don't have to do anything but focus and shoot. Um, but first I have to mount everything on a tripod. At twenty-power, camera shake, even minute vibrations, is terrific. 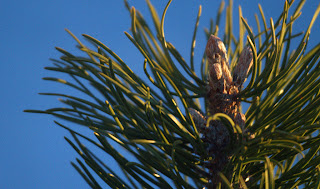 How's the image quality? Who cares? You're lucky if it's only lousy. It's the effect you're going for. At f/8, you get a small sliver of "sharp" image to move back and forth. This lens really only shines at sharpness set at infinity. Landscape, mountain range image stuff.

I have read and seen a lot discussed about lens "Bokeh" a Japanese word used to describe the quality of out-of-focus areas produced in a photo. Smooth Bokeh is most desired. With a cheap mirror lens, save yourself the translations. You get out of focus doughnuts. Light, fuzzy, unnatural looking doughnuts everywhere. You either love 'em or hate 'em. Most people hate 'em, they did when film was king, too. I think they're funky enough to be fun. In the words of Homer Simpson, "Doughnuts, is there anything they can't do?" 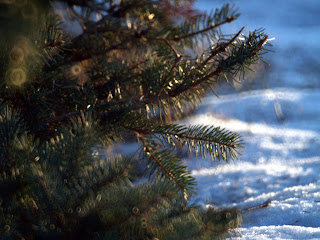 Check out the doughnuts going on in this next image of some pine needles. Nothing's sharp, not even the doughnuts. But if you know that, you can choose your subjects better. I wouldn't do a High School portrait this way, but light glittering off snow or a summer's day at the lake might yield some soft-focus images of a gentle nature. And, um, thankfully Photoshop has that fabulous unsharp mask function to clean everything up a bit.

The focus screens on modern digital DLSRs, particularly this Olympus model don't make using lens magnifications this high easy. The Evolt E-500 is always like looking down an optical tunnel. My OM-1 has a viewfinder on order of 100x better and brighter (rant ended). As the camera leaves everything up to the auto focus system, if you do choose to shoot old-school, the focus screen is about the same as those offered years ago without the fresnel or split-image focus aides we took for granted. Guess your best, shoot a bunch and chimp images right away for sharpness.

Why no focus help in the viewfinder nowadays? Most lenses, zooms,  are way slower in transmitting light than years ago. Anything slower than f/4.5 and the split-screens aides wouldn't work. The zooms we use today are glacially slow compared to the common f/2.8 and f/2.0 lens of film cameras. But with dial-in ISO values in digital cameras now going over 100,000 (yes, that's right) who needs to worry about having fast lenses? OK, my rant is done.

But for the cost of a $100 Olympus mount mirror lens from the 1980's, you can get SERIOUS telephoto reach. Honestly, very few people have a consistent use for this kind of magnification. Going this route saves easily a thousand dollars (or more) over buying a modern digital optic at this power.

I have shot with other Zuiko lenses, particularly the 50mm macro lens. Results have been far, far better. I'll be doing a kinda unscientific shoot-out with the other old lenses I have in springtime. I'll post the results.

The new Olympus EP-1 and 2 have the ability to add old OM lenses on them, as well as other mount types. At least that's the rumor about upcoming adapters. If so, that opens up millions of perfectly fine old lenses to a new life as digital gadget items. I'm fine with that. Part of the attraction of photography from the beginning for many of us was the fantastic variety of tools and techniques to explore.

Sony, Nikon and Canon all can mount auto focus film camera lenses (with some limitations). As far as I know, only Olympus can mount and use the old manual focus stuff. Let's hope this is the start of a wider trend of recycling vintage lenses back into service with the latest digital stuff.

In the meantime, I'll be enjoying my doughnuts.
Posted by Jim Eckberg at 3:30 PM