Petri Cameras; Bet you can collect just one!

Petri cameras are suddenly bountiful for collecting lately. Lots of models of their rangefinders and SLRs are to be found on auction sites. Which is odd for me, since you could hardly find a new model to buy back in the day. Anywhere. Petri cameras were never known for their build quality, advanced engineering, optical sharpness or even their good looks.

Back in the early 1960's, Petri had a couple of, um, competent cameras, particularly the 7S Circle-Eye 35mm rangefinder. It had a pretty good lens, reasonable fit and finish, and a fairly reliable shutter. It was an OK camera for a few years between the Kennedy and Johnson administration years. That's about it.

The company doggedly tried to stay in the world-wide 35mm SLR market, but they were always behind in features and styling. You could call them the American Motors of the Japanese camera manufacturers. All they made were Pacers and Gremlins.

By the early 1970's Petri cameras were hopelessly out of date in their technology. They couldn't keep up with the emerging electronic substructures to cameras. Without a base of rabid fans for something unique about these manual cameras (like lens quality for instance) the company finally collapsed on lack of innovation about 1977. It's had to feel too sad about that. These cameras are not great image-making tools.

Instead of using an existing lens mount for their SLR's line of interchangeable lenses, they opted for their own design. Always a fatal marketing flaw. Perhaps if they went with the universal screw-thread mount, they could have fared better for a bit longer. As it is, I've found a scant few lenses out there. I've got one 35mm lens for my Petri. The build quality is rough. That's the word. Rough. Optical quality was supposed to be OK. I haven't tested it yet. 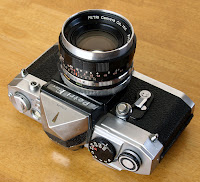 I have a Petri Flex as my sole example of the brand in my collection. There is so little information about these cameras out there that I would have to guess that it comes from the mid-1960's. That's based on features and the looks of the unit. But that's just a guess. I'll keep looking.

This camera is an all-star Petri. The chrome finish is a bit crude (too shiny). The leather coverings are good, but they don't look like any other camera's leather. Kind of a discount leather. The controls are in odd places and come complete with odd shapes. The shutter release is on the main body in the front, not on the top like 99% of all cameras. An Alpa this isn't. This location required extra engineering to do. Why? No idea, there's no extra benefit and it's actually uncomfortable in this position. Maybe they did it just to be different. Score one for them on that count. When the shutter goes off, it sounds like the camera is in pain. You can tell there's lots of empty space in the body to resonate the shutter's noise.

I'll leave comments about styling alone. Except to say that Petri SLRs were a mash of many German and Japanese-looking exterior design features. And not any of the good ones.

Taken all together, a Petri SLR is a goofy instrument. Maybe that's why I love it. I've taken it out into the sunshine a couple of times to shoot some photos. People squint and look puzzled. It's like driving around in a Studebaker. Not an old car anyone would really want to spend money on, but they can appreciate your taking care of something weird.

Whatever, you sure can find oodles of Petri rangefinders and SLRs for sale out there these days. Most of what people bought of this brand has been junked. The failure rate on new Petris was very high years ago. What's left seems to be the cream of the crop, as it were.

Don't be fooled. Go ahead and collect Petris if you like funky-looking Japanese cameras. As an investment object, the brass inside of them is worth more in scrap than the potential collecting value. Accessories like lenses and general doo-dads are very rare in North America. We just didn't like this brand of camera when it was in its prime. I guess some things do get better with age.

Still, everyone should have at least one Petri in their collection. It helps to highlight how truly well built Nikons, Canons, Minoltas and other cameras were, and are. But keep it at one camera. You won't be sorry.
Posted by Jim Eckberg at 2:22 PM