When in doubt, buy the second one? 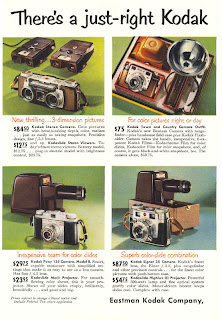 I was passing through a local thrift store after dropping off some donations. I saw a beautiful Kodak Signet 35 35mm film camera on the shelf. The leather case was in tatters, but the camera was nearly perfect. The shutter worked, the rangefinder was bright and accurate. As my wife shopped for potential treasures on her part, I continued to evaluate the camera. Took the back off and practically disassembled the Signet right there. Fabulous. Great little camera that I could actually use to expose some film. Fun on the way. But then, I already had a Signet35. Right? Or did I?

The camera was marked at under $8. A real steal. Then again, with the world gone madly digital, you can find almost any film camera under a sawbuck. But, again, I was convinced I already had an example of this fine Rochester NY-made unit from the 50's. They're so plentiful on eBay, why it's one of the first Kodak 35's people can collect with ease. Why would I need two of the same model? I put it back on the shelf with a heavy sigh joined my wife.

At home, sure enough, I checked my inventory. Yep, I only thought I had that model of camera. Just goes to show that if you can't remember if you have a particular model, you've probably got too many cameras in the collection. Some problems are the good kind.

The next morning, I went back to the thrift store, and of course, the camera had been snapped up by a lucky camera buff. Let's hope it brought them film-based joy.

The lesson for me is that I'm comfortable that I had the discipline to not buy what I thought was a duplicate unit. Then again, at $8, what was I thinking? No, no. There are other Signets out there. There's no rush to complete my collection or blow through even small amounts of money without a good reason.

But, um, now I carry a mini version of my collection's spreadsheet on my phone. Just in case.
Posted by Jim Eckberg at 8:14 PM