I work in marketing. Have for more than two decades. Whenever a client or boss presented a clinker idea during a meeting, we'd all nod and say, "Now there's an idea!" We didn't say it was a GOOD idea; just an idea. Usually a bad one.

Back in 1990, the Canon camera company had a brave idea. "Let's redefine the shape of how 35mm cameras are made. Why should we be constrained to the architecture of a mid-1950-s camera layouts? I mean, who says cameras can't be shaped along more functional lines? It's the 1990's for gosh sakes!" To increase sales of high-end point-and-shoot cameras, and to further Canon's lead in consumer's minds as being the undisputed, most technically advanced leader in camera technology (they had just released the wildly popular EOS 650 auto focus SLR in 1987), the company unveiled the Photura, a flop so major, it remains solidly ensconced in the "untouchables" caste of collectible camera gear. 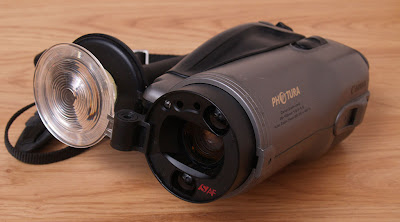 The Photura looked like an SLR but it wasn't. It looked solidly built, but it wasn't. It appeared to be the "next thing" in cameras, but it was usually the last camera sold on clearance. It's got so many things wrong with it, designed with the best intentions, that I simply had to have an example for my collection. It's like having an Edsel in your garage along with a Mustang and a Model T. You gotta love the runts of the litter, too.

First off, these things are bigger than a 35mm SLR. It's the Budweiser beer can shape. I suppose the Photura had to be larger because, as the designers opted for a new layout, they probably had to give themselves plenty of internal "wiggle" room to work out all those new locations for apparatus and mechanisms. Their long experience with traditional camera assembly requirements just wouldn't apply.

At the time, most cameras were either black or silver/gray in color. Tradition. Canon opted for this "champagne bronze" color. The paint didn't go too deep. Even a simple scratch gets you down to the dark gray base plastic color. So, um, why not just have made it dark gray, eh?

Next they went over-the-top in their overall plastic construction. Not too surprising. The EOS, "T" and "A" series cameras had established in the photo public's mind that strong, economical plastic coverings could work fine. With the Photura, this devotion to petroleum structures went mad. Again, without much time or experience to tweak the construction, what they ended up with felt more like a cheap transistor radio in your hands and not an optical instrument. It creaks. Just sitting on your shelf, it shifts and pops. The construction did not feel like it came from the same people as the F-1.

You do get this huge wrist strap. So now an overly large camera looked even bigger with this broad handhold which you couldn't remove (not "handy" for gloves in cold weather). Then, there's a neckstrap connected to the rear of the camera body. There's more strappage than camera here.

Its 35-105mm f/2.8-6.6 lens covered a decent, but limited range. A 28mm to 135mm would have been better for scenics to portraits, but that might have increased the length of this guy to make it an even longer looking champagne-colored cigar. The lens has a hinged lens cap that you swing out of the way when you're ready to snap photos. It makes the camera look like the top of the exhaust stack on a Mack truck. The lens cap includes the electronic flash with an absolutely indescribable matched zoom magnification/flash direction fresnel lens system. How clever to tie it all together. When you zoom the lens out, the clear flash lens moves away as well to focus the pulse of light farther out. The word "dopey" suddenly comes to mind once again. Plenty of opportunity to break this stuff off by the average consumer. Yep, that's what's missing on most examples that are still around.

The Photura does nothing manually. Nothing. Everything is motorized. You really don't do anything but point and shoot. The zoom is powered in and out with a loud grinding noise. Guaranteed to get you heard at your kid's once in a lifetime music recital. As with the EOS, focus is done for you by a complex computer system. You take it on faith it hits the right subject. In the viewfinder, you get plenty of nothing. At best, it tells you when you're about to screw up. A green light means go, red means stop. As in stop using the camera.

One good point is how you hold the camera. Score here. You slip your right hand (sorry lefties) into the handstrap and your index finger falls comfortably on the shutter button on top while your other digits rest on a simple fingerhold. Not bad. You need to stretch your index finger rearward to move the zoom lever, but it's not too bad.

But then you try to look through the viewfinder. Pick either eye and your nose rests on the back of the camera. Keep a tissue handy for cleaning. Ew. Again, you don't actually look through the lens, you look through another tiny porthole with a zoomed approximation of what the prime zoom is doing. The face of the camera has more eyes than a tarantula, what with all the lenses for the auto focus system and viewfinder port. I'm no engineer but it would have seemed to have been cheaper to have made this thing a full-fledged SLR. The back of the camera remains a mystery to me. It features controls that require you to stick your fingernails into small oval-shaped areas to change settings. The small LCD panel provides scant information. Anything shown could have been put in the viewfinder. I suppose they had to fill the space on the back of the camera with something.

Loading the film is the absolute reason you need to have one of these dudes in your collection. Hand a Photura to an old film photographer and ask them to open it up to put in a new roll of Kodacolor. They'll turn the camera all around and eventually get bored. As with the lens, flash, grip and shape, nothing is where you'd expect it to be. Does that sound like one reason sales didn't exactly catch fire with this Canon?

If you persist in looking for the film chamber, look under the camera right next to the tripod socket. The tripod socket. There's a small RED latch marked "Open". It's the only thing red on the body but you'll still miss it. If you can get your fingernail into the very small slot (always with the fingernails with this beast) and move it forward, the whole freakin' bottom of the camera pops open. Scares ya at first. You're supposed to drop in the film and close the door; the Photura does the rest. The problem is, you're not sure at first where the film goes. Instead of a left to right path, your Fujicolor will take a "S" turn to the take-up spool.

While you've got the back open, you can change the battery. It takes a 6V battery that you'll be needing to change quite often, given all the motors you use to get your shots taken. But, if your batteries die while a roll of film is loaded, there's a separate battery door on the film door. Doors and straps.

OK, enough. I still like this camera. In a world of conformity and tradition, it stands out. It's like Canon had to get this thing out of their engineering systems. I'll bet they blame the consumer for not "getting it". Using a Photura back in the early 90's must have been the photographic equivalent of getting a snapshop only after solving a Rubic's Cube. The camera is too much trouble to use, even with all the automation. And, it looks weird to use at your kid's baseball game; there, I said it. No one wanted to draw attention to themselves taking a picture. That's why there's only one Photura from Canon. If you're a collector, you gotta get one.

So, Canon, when it comes to your Photura, "now there's an idea!"
Posted by Jim Eckberg at 6:00 PM