If you limit yourself to collecting professional-grade Nikon 35mm cameras from the 1960's, the good news is that you'll only have a few models to find. It's true. In that decade, Nikon really only released two main models: the Nikon F and the Nikkormat FT. Let's not count the goofy Nikkorex series for now.

The Nikon F was the much lauded professional camera, evolved from the company's excellent rangefinder cameras of the 1950's. It was once the undisputed king of 35's. Introduced in 1959, the F was upgraded several times to compensate for its two major short-comings: no through-the-lens metering and no film motor drive ability. The basic body stayed the same while new prism finders and custom-fit motor adapations were introduced.

The F was a very expensive camera in its day, going easily for over $400 per body. That'd be about two grand a pop in today's dollars. News services ordered them for their shooters by the hundreds all the time.

Even as successful as that camera was, Nippon Kogaku (Nikon) decided it needed to produce a less expensive camera for advanced amateurs and pro-wannabees. This way more people could take advantage of Nikon's wonderful selection of exceptional quality (and expensive) lenses without breaking the bank on just a camera body and a normal lens. Brand extension for more profit. No problem with that.

Enter in 1965 the Nikkormat FT (or Nikormat in Japan). Positioned as a transition camera to what you should really own (that big ol' F), this camera was a brick of solid brass construction. Fit and finish is exceptional even forty or more years later.

In reality, the FT was still too expensive for most people, which was just fine with the folks at Nippon Kogaku. This helped preserve the well-earned brand image of Nikon as the preeminent 35mm camera builder. You could strut about with a Nikkormat around your neck in much the same way Lexus drivers imagine we're all admiring their choice in fine automobiles. Didn't matter if all you shot were photos of Christmas and the occasional birthday party. You were in. You were happenin'.

SIDE NOTE: Nikon also made an attempt at a cheap camera during this period with the name Nikkorex (made by other camera manufacturers). But that camera series did more harm than good for Nikon's image. Those bodies were oddly shaped and not very well finished. Break-downs were frequent and inexcusable. Nikon wasn't going to make that mistake again. The Nikkormats were made in-house by Nikon to Nikon's OCD specs. That's why I treat the Nikkorex as a separate, hybrid camera model to collect. Collector snubbing.

The original Nikkormat FT veered off-course with its more expensive parent, the F, in several features, all improvements over the Nikon F. The shutter speed settings were made by turning a ring on the lens mount, exactly like an Olympus OM series camera. While not as convenient a placement for this control as on the top-plate for photo-journalist trying to get a shot in the line of fire, it was very appropriate for the day-shooter who would typically settle on one speed and leave it alone. Yeah, and the little prong sticking out to help you rotate the shutter speed dial often interfered with a tripod mounting plate, but wow, it was convenient to your finders.

The viewing pentaprism was fixed to the body, where on the F you could exchange theses pieces of glass for several other viewing options. What you gained on the Nikkormat was through-the-lens metering in a compact (for a Nikon) format. This was something that the F struggled with for 0ver 10 years.

Even better, there was a small meter window built into the camera body on the top-plate where you could determine the proper exposure level without looking through the camera! This was ideal for situations such as microscopic photography, slide-copying and use with telescope. Very handy.

Most beneficial was the swing-open back to the Nikkormat. On the F, you had to remove the whole camera back to load film, a throw-back to the early Nikon rangefinders. You needed three hands to hold the camera body, the back and load film. Unbelievable. A huge negative everyone just put up with. On the Nikkormat FT, you only needed the usual number of hands to load film. A huge advantage.

In 1967 the Nikkormat FTn became available. This differed only in the metering pattern and some improvement in the linkage with the aperture indexing required when changing lenses. (You had to attach a lens when it was set at f/5.6 and then ratchet the lens opening collar back and forth to set the minimum aperture with the camera - yeah, it was crude.) 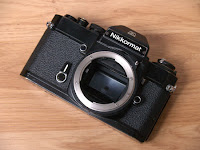 By 1972, Nikon took the FTn build and created an aperture-preferred automatic version, the Nikkormat EL. Fabulous. Heavy build, lots of new features. The camera had mirror lock-up and a much better metering system. You really can't appreciate this camera until you hold one. The precursor to the Nikon FE, this camera is solid. Whether that translates into better photos doesn't matter, you had confidence that this machine would take abuse and keep working.

The early electronics system of the EL demanded a lot of power. EL's are well-known battery eaters. So much power was needed that the typical button-batteries were too small. A larger battery was required. With few empty spaces available, Nikon engineers opted to place the battery under the mirror in a secret compartment. Hence a double reason for that mirror lock-up feature.

The Nikkormat ELW (1976) came around soon after which offered a screw-on motor winder accessory, something the professional Nikon F and the Nikon F2 couldn't do. If you find an ELW with a winder, get it. Better yet, get two. The weight of one of these suckers on your shoulder can hobble you. Balance all that weight with another on your other shoulder. Load the camera with Kodacolor and install the forty billion AA batteries in the winder. When you hit the shutter, you won't find a louder, slower film winder. Il's like starting a Ford F-150 at forty below zero. It is sooooo cool. It's like shouting, "Yeah! I just took your photo, so whaddya gonna do 'bout it?"

By 1977, the Nikkormat EL(W) evolved into a full-fledged Nikon EL2 with the new AI lens mounting. End of the line for the Nikkormat automatic.

The Nikkormat FT2 (1975) and FT3 (1977) models offered improvements to the aperture linkage, a built-in hot shoe for flash attachment and (with the FT3) full Nikon AI aperture compatibility. But these models, as fine as they are, are just incremental improvements to the venerable FT from the Johnson Administration years.

Collecting The Nikkormats
They're going cheap. Cheaper than their wonderful, rugged construction should go for. Some FT's go for not much more than $20. But, for the collector, that's good news.

The late model FT2 and FT3 are much harder to come by and do fetch higher prices. Theses models also seem to all be in better shape. The FT2 only lasted a couple of years, it's probably more desireable of any model. The FT3 suffered the fate of being offered the same year as the much better Nikon FM. Same price for a smaller camera with motor-drive capability. End of the line.

Nikkormats will usually work or not: 100% failure or 100% service. Meters can be the weak link on the FT and FTn, ditto on the EL. Shutters seem to be the most dependable part of a Nikkormat, with only the typical sluggish lower speeds cropping up.

Don't worry if the model you're looking at has a few bumps and dents. Even grisly amounts of wear. That won't matter with camera function and some battle damage adds to the photo-journalist allure to the cameras. It's like owning a one-eyed alley cat.

Suggested Nikkormat Models to Collect:
As I've said, there are only a few available. Get a FT and FTn, FT2 and FT3, an EL and ELW and you're really done. Six cameras.

US GI's stationed in Japan would bring home the Nikormat (one "k") models. They are the same as the imported Nikkormat versions, but that might be something you could look for to distinguish your collection slightly.
Email Post
Labels: 35mm Nikkorex Nikkormat Nikon