Have been smitten by the Zeiss Ikon Box Tengors lately. I grew up with ubiquitous Kodak box cameras stored in closets or drawers throughout my parent's home. The Eastman's cardboard and wood construction and single 'you push the button, we do the rest' operation was honest to the goal of getting family photos made as easily and cheaply done as possible. Have no problem with that. Kodak box cameras - for the most part - are pretty interchangeable and lack any sort of attempt at style. That wasn't their purpose.

Flash forward to current day. I happened to purchase my first Box Tengor at an auction as part of a small lot of older cameras. My real target at the time was a pristine Argus CC 35mm camera in a large container. A dingy cube-shaped leather case came along with the winning bid of the CC. I soon realized this case contained a camera from the vaunted lineage of Zeiss Ikon - a Box Tengor. Wow. A very nice extra. An impressive camera. 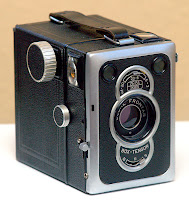 For a 'simple' box camera, this was shockingly different than the Kodak boxes I knew. It offered a truly usable lens, took 120 film and had solid construction, along with more than enough elegant Euro-styling to silence any photo snobs nearby as whipped it out to take some snaps.

A trip to a local camera store resulted in the purchase of the next Tengor. This one was in even better shape and featured chrome accents. (sigh) Now I'm hooked. I'll be sure to keep my eye out for any online offerings or thrift store finds - though it seems these old Box-Tengors are not very plentiful in the US as they would naturally be in Europe.

Along with the camera came a ratty set of instructions. I've scanned them in their rather raw state for your review. Kodak never needed to shop instructions with their box cameras. With the Zeiss models, you definitely need to read-up before heading out to shoot. 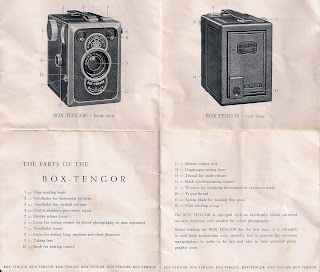