OCR scan of original magazine article. Provided here as a source of vintage product information and entertainment for camera collecting. Modern Photography magazine has long since ceased to exist. If any copyright holders can be found to object, I will remove this entry from my blog.
THE EDIXA-MAT C: AN SLR WITH METER 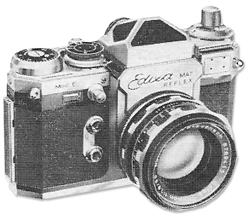 Manufacturer's specifications: Edixa-mat C 35mm eye-level single-lens reflex. Lens: 50mm f/1.9 Xenon with stops to f/22, focusing to 1-3/4 ft. Shutter: Cloth focal-plane with speeds from 1- 1/1000 sec. plus B, FPX sync. Viewing: Interchangeable eye-level prism finder with ground-glass screen and split-prism rangefinder. Other features: Built-in exposure meter; internal automatic, instant-return diaphragm; rapid return mirror; depth-of-field previewer; manual reset frame counter; shutter release safety lock. Price: $299.50. Importer: Edixa Camera Co., 10 S. Second Ave., Mt. Vernon, New York.
The Edixa-mat body is basically the same as that of the Edixa Reflex, which was reported in the August 1958 "Modern Tests." The main differences are that the newer camera has a rapid-return mirror in addition to the fully automatic diaphragm, it has a different standard lens, and it costs about $30 less. The Edixa-mat comes in three versions: the B is the basic model, the C has an improved built-in exposure meter, and the D has an adjustable self-timer.
Mechanically, the camera operates smoothly and easily. The rapid wind lever with its 180-degree throw is among the sweetest-moving we've handled, and the front shutter release is among the most sensitive. Of course, since the body does remain much the same as that of the Edixa Reflex, there's still a rewind knob instead of a rapid lever, and there are two setting dials, fast- and slow-range, for the non-linear shutter speeds.
What we said of the Edixa Reflex' finder image applies just as well to that of the Edixa-mat: It "was exceedingly bright and had no fall-off of sharpness or brightness at the image corners. The centrally located split-image rangefinder worked clearly with both halves of the image moving out of alignment when the camera was out of focus." In addition, the Edixa-mat features a flag that appears in the finder to warn you when the shutter is not cocked.
The exposure meter offers a dual brightness range, with a hinged baffle over the meter window that is raised or lowered accordingly. The meter proved to give sensitive and accurate readings in a low-light level requiring the equivalent of f/2.8 at 1/50 sec. with E.I. 400.
Our tests of the 50mm f/1.9 Xenon lens showed that central sharpness was good at f/1.9 with much fall-off at the edges. Between f/4 and f/5.6 sharpness was very good with some fall-off in the corners. Overall sharpness decreased slightly at smaller apertures.
Some of the corner sharpness fall-off found with this lens is caused by curvature of field. At all but moderately close focusing distances this effect is slight.-W.H.J.
Email Post
Labels: Edixa-Mat C Film cameras Xenon lens