The Recession is Over for Vintage Camera Prices, Too 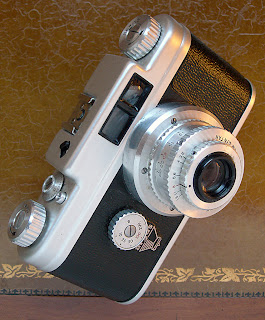 A quick, unscientific observation reveals that, after a steady decline, prices asked for by sellers of vintage cameras on auction sites in early 2011 is clearly on the rise. Some recent examples of body and lens pricing has approach nearly comical proportions as sellers smell green blood in the online waters.

Film camera prices had been on a meteoric fall in value as digital equipment soundly, finally dominated the image capture market. Instruments that once cost hundreds of dollars to buy when new had bottomed out late in 2010 for literally pennies on the dollar. It seemed to be a race to offer them for free.

Once proud brand-name equipment such as Nikon and Canon had been seen as selling for as little as under $10, but often ended up few takers on at least a couple online auctions. Canon EOS autofocus models, particularly the early versions with all that amazing technology would sell for the price of a dinner at Denny's. Sellers had even taken to splitting up camera bodies from their lenses or grouping an oddball camera with one of some perceived value as a way to move the product and make a small profit to an audience of quite cost-savvy buyers.

Ubiquitous, once wildly popular Kodak, Ansco, Agfa, Argus, Spartus and other makes, still available by the thousands, have suddenly gone from under $20 delivered to "buy it now" asking prices sometimes in the hundreds of dollars.

You can't blame the sellers. After nearly ten years of drubbing decline, they must have just about given up on any gainful transaction with film equipment. For all of us, now's the time to sell, sell, sell.

So what's changed? Here are my barstool opinions.

First, gravity, corrosion, metal fatigue, mold and time have keep working their degenerative magic on all those millions of old film cameras out there. You may have noticed that the rate of inoperable cameras for sale has increased. Finding a camera with all its part intact AND in complete working order is becoming harder to do.

Secondly, the number of repair services for film cameras continues to dwindle quickly, adding to a growing amount of good equipment in dire need of some routine CLA'ing. And since no one wants to repair or maintain a camera that was bought for ten bucks when the repair bill is over one hundred, that Canon AE-1 with the dreaded, easily fixable mirror box squeal just goes until it breaks. What a shame. It's like running your car with dirty oil long after the time when you should have it replaced. What's left is breaking from wear and poor maintenance, further reducing the pool of good working examples.

The good news is that film is making a kind of minor come-back. There are now more and more younger folks interested in chemical based photography for a wide variety of reasons. So many steadfast old camera models with manual controls are more frequently sought after. The trouble is that sellers perceive that ALL cameras have increased value, not just a Minolta SRT or Pentax Spotmatic.

Personally, I'm almost glad to see prices rise. Sure, it makes camera collecting more expensive and more difficult. But higher prices might be what's needed to ensure the preservation of our hobby and our devotion to silver-based image-making. Perhaps a few mechanically-inclined younger people will even be able to at least see the possibility of learning the camera repair trade and even earning a living from doing it.

Long-term, there will be fewer and fewer good examples of the old stuff around. Even with over six billiion people on the planet, no manufacturer seems to want to take on making a new film-based camera.

I think the heady days of finding an old Contax in a thrift store for twenty bucks are drawing to a close. As the supply of good vintage cameras begins to shrink, prices will rise. It's the way or the market.

The recession is over. It may not be a boom coming, but the bust is clearly gone. Choose your camera collection emphasis carefully and save your money. You're going to need it.
Email Post