I don't have a great affection for eBay. Kind of a necessary evil for camera collecting. Don't like Paypal either, and I'm kinda scared of some of the "don't know much about cameras" postings (if it's broken, just tell me). Once in a while, I find something interesting and take a stab at it.

A few weeks ago, I saw a blurry photos of something listed as "Old Minolta". Vague description, but offered from a more than occasional seller. One photo showed a closed case, the other an image of the opened camera, a folding camera. I knew it was one of the very first type of Minolta cameras made and expected it to go for a decent chunk of change. I put in a bid and waited for the outbid notice to arrive in my mailbox. I got it. Very surprised. 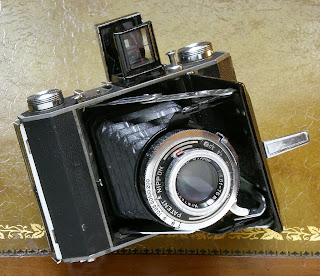 Less than a week later, I opened the box shipped to me and was delighted to hold what I could finally tell was a Semi-Minolta II from around 1937. It is surely the rarest item in my camera collection.

First impressions regard the size and quality of the camera. The Semi-Minolta II is a die-cast body folding camera that uses 120 film (hooray, I can still get that!). The image size is the 6 x 4.5cm format, which makes the camera body much smaller and far more pocketable than the full 6 x 6cm cameras of its day. This camera is the first model series badged with the name Minolta. Prior to that, the badge was the "Molta Camera" company. This is a mark II due to the faster 75mm f/3.5 lens as compared to the original f/4.5 lens.

Let me come back to the size of the camera. It is wonderfully compact, rivaling the small size of modern digital point-and-shoot cameras! For its day, it must have been about the equivalent of a "miniature" camera build. This would be a fine camera to have taken on vacations, outings or other personal uses.

The leather is missing here and there on my example. I don't care. It only adds to the charm of the camera. The way wear appears on the Minolta, it looks as if whoever owned it, used it. That adds more value in my book. To know that I'm the rest home for a camera that participated in someone's life connects me to the instrument in a personal way.

I'm off to find some 120 film. Before this beautiful Minolta lives out its last days on my shelves, I'll put one last roll of film through it. In honor of its proud Japanese heritage, it'll be exposed to the colors of a nearby flower garden and maybe a family portrait or two. The Semi-Minolta II is a rare find for me at a ridiculous low price. It skirted just under the radar of the cigar-chomping, griseled old camera collectors out there. So I imagine. Truth is, I got lucky. For me, it's a rare find of something even rarer; a fun afternoon outside in the sunshine quietly composing images.
Email Post
Labels: 120 Film Folding Camera medium-format cameras Minolta roll-film Semi-Minolta