Living with older Retinas - Kodak Retinas, that is

Kodak Retina cameras go 'way back in my family. My dad spend a puddle of cash and bought a Retina Reflex camera outfit back in the early 1960's. A WWII veteran, he liked the combination of German technology and American marketing. That Retina was treated it like a precious gem. A special case, routine and gentle cleaning, and it was never exposed to inclement weather.

Dad's gone, but that Retina lived on with my brother as part of a camera collection he had started. The theme of his collection? What else, Kodak cameras, especially Retinas.

Well, it came to pass that my brother died quite young of a freak infection to the lining of his heart. His collection passed over to me. I could have just stored the many examples of his cameras, but no. Apparently, camera collecting is also infectious. But it turns out a good kind of illness to catch. I was hooked and on my way.

My idea of a camera collection is much wider in scope than my sibling's. As I have told many folks, "I have a low level of appreciation." Just about anything photographic is interesting to me. I've been involved with marketing and engineering for decades, so I can appreciate objects from many angles.

Recently, I found a nice Retina I (010) 35mm camera and its original leather case. The camera is post-war, about 1947-47. I know this because of the plentiful and accurate Retina data Chris Sherlock keeps on his web site. 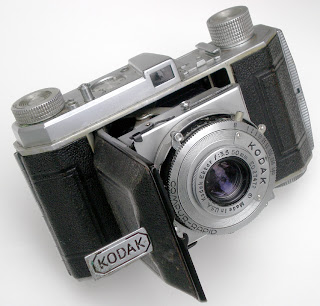 The model I bought features a slower-speed Kodak 50mm f/3.5 Ektar lens, which also looks a bit on the small size when set in the Compur-Rapid shutter. Retinas could come with a variety of lenses, I suppose depending on how the supply chain went after the war.

This model has no rangefinder, you view your subject directly with a very small eyepiece. What's amazing is how large the image appears with this small viewfinder. You'd swear it was an Olympus OM-1 viewfinder, the image is so big and clear. Without the rangefinder assistance, you guess your best for focusing the lens. All distances are marked in meters, no feet. That's OK, I'm pretty sure you could be off a bit and still get an accepable image.

Taking a photo with this Retina is a deliberate event. You must set everything yourself; shutter, f-stop, film-counter number, lens focus distance: everything. So, you tend to compose a shot long before you prepare to cock the shutter and let the light shine through the Ektar. Using this camera is a lot of work. But that's what makes the Retina a joy to use.

I know, in our digital age, we can easily snap shots as fast as our camera's buffer can go and for as long as the batteries hold a charge. Pow, pow, pow. It's great.

The Retina is photography at a much more stately pace. You observe and regard at first. Then, if sufficiently interested, you capture the image after carefully preparing the instrument. You and your image are completely engaged prior to releasing the shutter. It helps to have a gin and tonic first before taking a stroll with the Retina. Settles the nerves and soul a bit

Now I'm hooked on Retinas (again). Kodak's German camera arm was famous for a variety of slight variations to every design. This makes them endlessly fascinating to collectors. There's so much to learn, sooooo much to acquire! Just figuring out or remembering the three-digit code for the model numbers is a great stretching exercise for the old brain-box (is this camera a (010) or a (013)?).