Seeing all the European collectors and what they chose to feature often exposes me to photo manufacturers who were uncommon in the US years ago. Praktica is one such manufacturer. There are many, many photos of various Praktica cameras on Flickr with captions extolling their rugged construction and reliable operation. So, when I happened to find an example of a Praktica camera at a local antique store, I decided to try one.

Now, mind you this is the experience of one camera model out of dozens the company offered through the years, and I don't know how well the previous owner cared for the instrument, but I gotta say, "what's the big deal here?"

The Hanimex Praktica Nova IB I purchased has one significant reason to exist: it makes even the sickliest of the other European or Japanese cameras in my collection look robust and well-designed. Wow, what a dog.

While it has a shutter speed dial, the speed indicated has no relation to the one you get. Wind and shoot two times in a row and you get two different speeds. Rotate the dial in any direction and you never know what speed it will land on. Now, I know, this is a repair issue. But I have never seen this in any other camera I've owned or known about going back over 30-years.

Everything on this camera is cheap. It's so bad, it was worth buying just to keep finding short-cuts and compromises. The body finish is bad, the controls seem to be machined by high school students. The Selenium meter (hopelessly out of date for 1967, the year this camera was introduced) is hidden behind the front nameplate. So, we know that they knew it was a negative selling point from the get-go. As to the Oreston 50mm normal lens, I'll have to mount the lens on my Spotmatic II to see if that at least it was well made (having my doubts). With its machined focusing and f/stop ring grips, it looks more like a lens for a darkroom enlarger than a camera lens. Plus, you can file your nails on all that exposed metal. Ever heard of rubber grips guys?

So why do Europeans love these East German Prakticas so much? Must be the price when available. Europe has had periods with high VAT taxes on cameras. Perhaps the Prakticas were still a value even when saddled with the extra government charges. I mean, they do LOOK heavy-duty and rugged all right. But if this is an example of 1967 East German camera skills, they had a long way to go. I used to think that we didn't get Prakticas in the 'States because they were a product of a communist nation and we didn't want to trade with such folk for political reasons. (Not like now where we have fully embraced trading with communists as long as we can exploit their workers to fill our super-stores with cheap TVs and socks. I'm kidding and yes, I'm deviating from my point.) 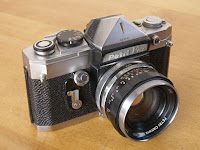 It turns out the main reason is that even the worst Japanese maker, someone like, oh, say, Petri could have made a better shooter than what I've seen in these Prakticas. We may have been saved from countless repair bills and millions of ruined photos.

In fact, the Petriflex I own that died in my hands one day has better build quality than this operational Praktica. It's a toss-up for last place in my collection, a Petri paperweight or the "guess what shutter speed you have now!" Praktica. Well, at least the German tank has a M42 lens I can maybe use for snapshots. The Petri's lens, with its proprietary breech-lock bayonet mount, is now only good for burning ants on the sidewalk on a sunny day. Which still makes it more useful than the Praktica Nova IB.
Email Post