I needed a job after high school back in the mid-1970's. At that time, there was a large, successful Midwestern department store chain called Dayton's. It was a very highly regarded place where you could get anything from airline tickets to fine china to a good suit or bath soap. Old-school department store variety. Dayton's eventually died as the family that owned it sold it to new investors, and they in turn sold it to other investors. Now, the same store is a Macy's; a chain we stodgy prairie types are not fond of.

Anyway, among the many departments Dayton's maintained was a camera counter. I got my first real job selling film and processing as the part-time number two clerk at our out-state store. Eventually, I got the chance to sell cameras and lenses. It was the big leagues of camera sales in our town and I loved that job.

Dayton's was very selective about which vendor brands to feature. Their policy with customer service was very liberal and they needed to partner with companies whose products offered reliability and a certain panache that fit in with the store's brand image. Along with other manufacturers, we sold Minolta products; their cameras, lenses and binoculars. Since we a more rurally placed store than the main metro locations, they did not offer the high-end stuff where I worked. You could get Nikons and Leicas from Dayton's, but only from a trip down to the main big-city stores. Minolta would do fine for us hard-scrabble farm types. And they did. 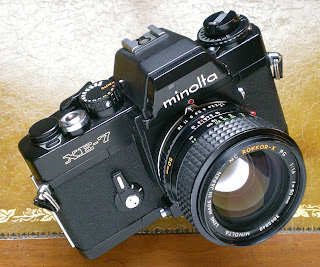 I didn't really need much of a camera in those days, an Instamatic did fine for most occasions. I was a long-haired nineteen-year-old with visions of moving out to the Rocky Mountains someday, man. Then we received a shipment of the (then) new Minolta XE-5 and XE-7 cameras. At first, we could only have a scant few as these popular cameras as they were being rationed among the many other stores. It was a game changing moment in my desire to own a really nice camera. Nothing felt so solid, so smooth, so ,well, sexy as that Minota in your hands.

The XE series of Minolta cameras were developed in conjunction with E. Leitz, the maker of the Leica camera line. Leitz was suffering greatly in those days. Their labor-intensive manual technologies lagged far behind Japanese makers and the prices they charged were far out of line in the days of gas shortages and high mortgage interest rates. It was truly a different time. Leitz selected Minolta to help drive down the cost of their new R3 SLR camera by doing the manufacturing in the orient and not in Europe.

It was a huge win-win for both companies. Minolta got to work with the god-like inventors of the Leica camera and have their quality shine rub off on them. Leitz got access to fabulous mass manufacturing facilities, cutting-edge electronics systems, and to work with a Japanese vendor who still made their own glass (most makers, other than Canon and Nikon, subbed-out their lens glass-making at the time).

The XE-7 had a decidedly European design look, a remarkable new metal shutter, and the fit and finish was far better than the company's long-lived SRT series. It wasn't a Leica in terms of snob appeal, but it was a match in operation and construction.

Oddly enough, what seemed to help sell the camera like hotcakes at our camera counter was a typically overlooked feature on cameras of the day, the film-advance mechanism. With other makers, this function was merely to advance the film to the next frame. Minolta and Leitz made you WANT to advance the film. The action was so smooth and sure, completely unlike other cameras of its day. A Nikon F2 had a stiff, geary feeling to the advance. You knew it would last forever due to it's over-the-top industrial feel. Not so with the XE-7. People surmised that if the simple film advance had so much attention paid to it, well then surely the rest of the camera must have that Leitz attention to detail, too.

I had to have one of these cameras, had to. I remember that the camera body, leather case, Minolta Electroflash 25 and 50mm f/1.4 Rokkor-X lens camera to just about $425. A fortune in those days of $2.35 an hour wages. I applied for and got a Dayton's charge card and made endless payments. Who cared? I owned what I thought was the poor-man's Leica. Which it was.

The lens was superb. Loaded with Kodachrome, what you got back had excellent resolution, contrast and color. Even snapshots looked better. I made Kodak a lot of money buying film the summer of 1976,

Minolta always favored their own type of light metering pattern. Their CLC or Contrast Light Compensation system on the SRT series was very reliable under most conditions amateurs encountered. The CLC tended to over-expose a bit, which was easier to correct in the darkroom than under-exposed negs. The XE-7 didn't claim to use the CLC system, but the results were pretty much like other Minoltas. Reliable as sunshine.

I would have been happy to own the less expensive XE-5 version, except for the silly decision on body finish. This camera did not have an all-black finish. They left on the black prism area on the XE-7, but opted to go with chrome on the body. It looked odd then, odd now. And, as I recall, the price difference really didn't amount to a deal-maker over the sexier-looking XE-7. Too bad, it shot just as well as it's bigger brother.

I sold my old XE-7 in the late 1980's. Nikon took over my photo needs at that time. Bad idea. I should never have sold that fine Minolta and its lenses. I was fortunate to find a clean version of an XE-7 recently. It's a time machine. Everything about this camera is smooth and precise. The near vacuum tube electronics technology inside still performs faultlessly.

When I have a free moment, I still use the Minolta for quiet moment photography. With the loss of Kodachrome and those delightful days of slide shows with a gently whirring Kodak Carousel projector long gone, it's not the same. Still, I still regard the Minolta XE-7 as a pinnacle machine; the engineering talent, the manufacturing excellence that went into that department store camera could not, will not be available ever again. That's why I keep one close on hand. You just can't let go of your first love.
Posted by Jim Eckberg at 8:14 AM