My heart still flutters when I think about my luck.

I have this regular goat trail I make through local thrift stores, antique shops and pawn shops to look for vintage film cameras. Pickin's  have been mighty slim lately due to the economy and the general disinterest by merchants to do anything with film cameras.

So I walk into one of my typical haunts around lunchtime. On top of a glass case used to protect broken old costume jewelry appears to be a clutch of leather camera cases. Now, if you're a camera collector, you know that (in most cases) a black case probably holds a Japanese camera, a brownish case is usually something from Europe. (German leather camera cases have a particular deeper brown hue that is unmistakable.) Older American cases have a reddish-brown coloration; kind of the Kodachrome color equivalent of leather.

There were three brown, one red and three black camera cases. After a drought of looking for several weeks for something to collect in the small upper-Midwest town where I live, I hit the jackpot.

Each case contained a camera I didn't have: a Kodak Signet 80; Voigtlander CLR; German-made Argus V-100; Yashica Electro 35 GSN; Konica Autoreflex T; a Mamiya-Sekor 500 DTL (eh, not so whipped-up about that one) and . . . a Contax IIa in the original case with a German filter and a lens cap! The price for the IIa? $12.99. My guess is that some family member must have disposed of the whole shootin' match at once as just so much old junk, once they couldn't find the little TV screens on the back of each. Likewise, the thrift store only wanted it out the door to make room for digital stuff.

I literally scooped up all my little metal friends in my arms, forgoing to leave them for a second to fetch a shopping cart or basket. I stumbled to the check-out counter with leather straps draping all over my arms. The seven cameras cost me less than $70. Ten bucks apiece. I would have been happy to have bought just the Contax for that amount -- or more. 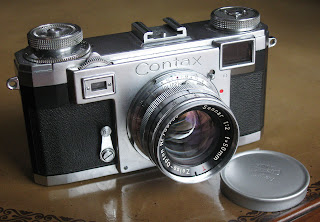 My collection does not contain many truly rare or historically important cameras. Until now. The IIa is my crown-jewel. This is a camera from a maker on par in the day with the vaunted Leica. This is the camera from which all Nikon rangefinder designs sprang. It's like finding a Rolls-Royce at a flea-market under a velvet painting of Elvis.

It's a beaut, too. Sixty years-old and it still feels good in the hands. It's still tight and taut in its fittings and movements. OK, I'll say it, "They don't build them like they used to." It's true and I feel better.

As a "black-dial" version (the numbers on the shutter speed dial), it probably dates from the early 1950's. The instrument is in great shape. The leather is perfect, the shutter sounds quiet and stable. Typically, the rangefinder is accurate but the golden image in the viewfinder does not match up vertically with the main view. Off a weee bit. From what I have read, that's a common maladjustment generated from time and gravity.

The only significant problem with the mechanics of the camera comes from some abrasions across the top rear of the camera in the chrome. Somebody removed a Social Security Number engraving in a less than delicate way. Brillo pad maybe. Shows the brass underneath. Looks better than my description. Eh, I'll take it as the camera will never leave my possession and I'm not into this for future value. Collecting is (mostly) a one-way ride for me.

Mechanically, I guess CLA'ing a Contax of this era is fairly easy, but requires experience. I've found more than a few shops willing to do the work. One dedicated shop appears to be outstanding. The cost is from $100 - 250. Added to my initial investment of thirteen-bucks, I'm still ahead and will own a refurbished unit. Um, that's how collectors can justify these kind of expenses.

The 50mm f/2.0 Sonnar is reputed to be one of the finest primes made. It is heavy and all glass and brass. You can almost imagine the technician squinting through a loupe while they assembled it by hand. Probably had schnitzel for lunch. I'll be running some film through the camera soon to find out how it stacks up against modern poly-plastic optics.

Here's the conclusion. I happened to visit my local camera store (yes, we still have one; yes, Best Buy and Wal-Mart are doing their corporate best to kill it) shortly after buying the Magnificent Seven. I know the young clerk pretty well. I describe my find of the precious Contax to him with glowing words and excited tones. I expected him to appreciate the rarity and value of my find. He didn't. He had no idea what the poot I was talking about. Who cares about stuff like that. (Well, me.) To him, the Contax, or whatever, thing must have been old and dirty and should be recycled into something more contemporary, more useful, like the internal parts of a new Canon EOS-1.

I understood his modern perceptions and choked-back my righteous indignation. Instead I said, "Well, if your customers ever want to trade-in old cameras you're not interested in, here's my card. Let 'em know I would be happy to make an offer" At $12.99 at a pop.
Email Post
Labels: Argus Camera collecting Contax IIa Voigtlander Yashica