Quite often, I can pick up a vintage film camera going for sale cheap because the owner thinks there's a problem with it that either doesn't really exist or can be easily fixed. Little things like a stuck self-timer, won't work because of unfamiliar operation needs by the user or  mirror lock-up due to a dead battery. Easily fixed stuff. 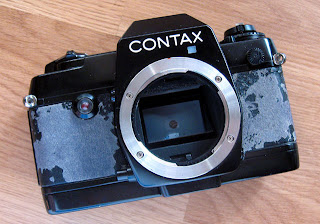 I found this very nice Contax 137MD camera with a couple of new-looking Yashica ML zoom lenses and a Contax TLA20 flash unit going for way less than $100. To me, a deal. Now, most film cameras go for nothing in these digital days, but a Contax at a great value is something collectors like me snap up fast.  Up until that moment, I didn't collect Contaxes. Now I'm on my way.

Mechanically, the camera was perfect. Just about as good as the day it was made. It's just that the leather (or "skin") on the body looked awful. That's purely a condition relating to the choice of a new synthetic material by Contax/Yashica in the 1970's. Instead of animal leather, they found a soft, spongy covering that had a wonderful grip and feel -- when it was new. Turns out, this covering deteriorated quite nastily over time, leaving a somewhat runny, sticky mess. Ew!

The owner loved the camera and reported on how much it cost him when new. He just couldn't stand using it in public because it appeared so shabby.

So what? A sawbuck spent at cameraleather.com and an afternoon of happy fiddling on my part will restore the Contax to it's previous glory. A classic camera and some time spent on my hobby. Life's good.

But since vintage film cameras have absolutely no value (other than for collecting) nowadays, I'll never sell it. It'll proudly sit alongside the other photographic instruments in my collection. I may opt to re-color the Contax in some other color than black. I fancy bright red for now. Since I fully intend to run some film through the camera, I may just want to break out of the current trend of strutting about dangling an all-black cookie-cutter looking DSLR and go for an old-school shout in the eye with wild colored coverings on something made during the Carter Administration.If I'm shooting with the 137 for fun, I may as well as have fun using it.

Than again, I kind of like that bad-boy look to the Contax right now. Perhaps I'm more concerned about how it looks and not how it works. Hmm, after all, beauty is only skin deep, eh?
Posted by Jim Eckberg at 7:57 AM