It seems that with every new old camera I buy, there's a side story. That's something I really like about collecting vintage cameras. It's one of the best aspects of the hobby to me.

Recently, I found a for-sale listing on our local craigslist.com site for a Rollei A110 camera in great shape. The price was only $20! A super deal. You don't see these cameras very often, and when you do, some collector thinks it's a junior Leica worth far too much. I collect for fun, not for investment opportunity.

I expected the camer 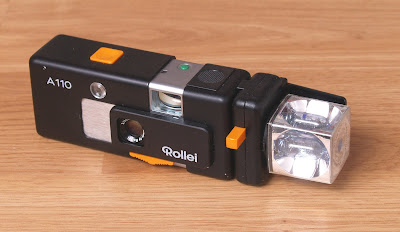 a to be a bit worn or abused at this low price. Had to be. But a Rollei for a sawbuck was hard to pass up. The owner was located in a nearby city. After a brief phone call to set a time and get directions, I set off to fetch this beautiful little "instamatic".

The owner had me meet him at his house on a busy, tree-lined residential street. He met me at the curb with a broad smile and invited me in to look over the Rollei. Very nice guy.

He brought out the camera housed in an old plastic bread bag. "Oh, boy, this could be bad," I thought. Instead, inside was a pristine example of a German-made Rollei A110 camera complete with a MagiCube flash adapter. Wow. Beautiful. These cameras were a high-quality alternative to the mainly disposable offerings by other manufacturers of Kodak 110 Instamatic film format cameras. 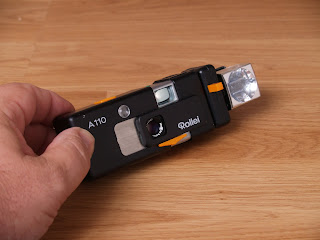 Rollei A110 CameraEverything about this camera is, I don't know, plush, over the top. The Rollei has a silken-smooth paint finish on its metal body that feels more automotive than camera like. It has a unique, complex and wonderful film advance mechanism whereby you pull on both ends of the camera apart and then push back in to cock the shutter and move on to the next exposure. It even makes a gear-whizzing noise as you push-pull on the camera. Cool. Very creative engineering and a mechanical marvel in miniature construction. The lens quality was reputed to be one of the finest ever placed in front of a cruddy 110 film cartridge. Too bad the film back in the day wasn't as good as it is now.

Needless to say, I fell all over myself handing over the twenty-dollar bill. With business concluded, the owner began to tell me how he came to own the camera. We sat on his porch and I listened to him while the hot mid-summer sun hit zenith.

He purchased the camera back in the '70's after he got a job at a Boy Scout camp in the Southwest. He wanted to have the smallest, lightest camera possible to take quality photos. He chose the Rollei A110 because it fit perfectly in a certain pocket in his backpack. It was also the "sexiest" camera he'd ever seen. Still was as far as he was concerned. The camera set him back a substantial sum for a young man, but he clearly loved owning it.

As the job's wages were not large, he couldn't really afford to take many snapshots with the camera. The shots he did take were saved for spectacular vistas or the singular moment with his fellow campers and co-workers. He captured a collection of great memories on every roll. I know, I saw them.

But, it was time to lighten up all the stuff he owned these days. No more 110 film is available and his digital camera takes better snaps. Time to sell. He was happy he sold the camera to me, someone who would appreciate it and take good care of it. We shook hands and I left.

For $20 I got a real gem for my collection. I was also treated to the personal memories of how the camera was used by its photographer. In my mind, that ups the value of this camera to nearly priceless.
Email Post
Labels: 110 cameras Film cameras Instamatic Rollei