Old off-brand lenses worth it? Sometimes.

Back in the bad old days, we photo people had a certain snobbery regarding our 35mm SLR equipment. If you bought Nikon, it was assumed you'd buy their lenses as well. Why contaminate a great body with an off-brand lens?

Cost. An old mechanical Nikon F body could set you back the modern equivalent of over $1,500 or so. A kind of HD TV of its day. Just to take photos, you'd need a few lenses of various focal lengths. A Nikkor would, again, set you back about $1,000 each in current change. Great lenses, no doubt, but you paid for those extra few lines of resolution.

If you were an amateur, you'd opt for one of the many off-brand lenses from Japan. In the US, we never saw much of European off-brands as their distribution companies tended to only offer the major lines of makers and promote their lenses only. There were a few noticeable exceptions, like Novo-Flex, but really, those lenses were too funky or expensive to be considered. 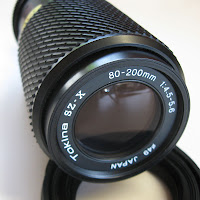 In the '60's and '70's, the big non-names were Soligor, Kiron, Tokina, Tamron, Sigma, and (everyone's favorite) Vivitar. The selection was amazing and the quality quite varied a bit, too. Which was not good. In anyone's line, there were optical stars and glass dogs.

There were a number of other lens makers on the market as well: Sun, Cambron, Kalimar, Aetna, Asanuma, Spiratone, Star-D, etc., but they were definitely second-tier suppliers. You could actually tell that by looking at them. Yeesh.

There were dozens and dozens of lenses created under contract by a handful of lens-makers with new names merely added on at the end. Add to that the many house brands from Sears, JCPenny, K-Mart and others and you had a staggering number of crappy lenses from which to choose. And people bought 'em. If it came down to having a 85-210mm zoom or not, many folk opted for at least the opportunity to magnify a shot by 4X with a Sears. I mean, if you're only using your SLR to shoot a few rolls a year, why opt for a pricey lens?

The photo magazines of the day were kept quite busy trying to uncover the diamonds from the slag. By the late '70's, many bad lens makers were beginning to fade as production costs rose. The good companies left in Japan had to start sub-contracting production to less expensive countries such as Korea and Taiwan. China was still an off-limits Communist regime (not like now, eh?). Many of these lenses were on par with their former Japanese counterparts. They looked the same and worked identically.

Time has proven the good brands out. The crappy lenses have mostly been recycled or discarded by their owners. You'll find them tossed in with a deal on a vintage camera at a pawn shop, flea market or online auction offering. I never have the heart to just toss out an old Zykkor or Prinz zoom; I just sneak them into the bag going back to the thrift store. Maybe someone will love it.

Which lenses to look for? Sigma, Tamron and Tokina in the '70's were not as well made as they are today. They were at the lower end of the off-brand layer.

In those days, it was Vivitar that reigned. It was "OK" to have one of their zooms, particularly their top-0f-the-line Series 1 types hanging off your Canon F-1. Vivitar, like most other brands, offered lenses with mounts specific to the maker, you could buy about any lens of theirs in Canon, Nikon, Pentax, Olympus, Konica and other mounts.

They even had trans-gender mounts so you could switch the same lens between your Canon and Nikon camera. Tamron was the king of this at the time with their Adapt-All mount. 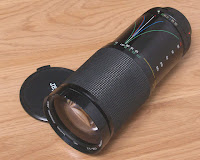 I still have a Vivitar 28-200mm zoom for my older Canon F-series collection. It's huge, it doesn't focus that close and it puts a strain on the lens mount when used on a tripod. Who cares? One lens for just about any casual shooting. I love it.

Vivitar also made a 20mm f/3.8 wide-angle with an ENORMOUS front filter ring. 82mm! It was one of the first off-brand wide-angles down in that range. It was significantly less expensive than a "real" lens from a big maker. It just took some getting used to seeing that huge front element and retaining ring.

Usually made by Kiron for Vivitar, that lens delivered great results with the bonus of a very close-focus distance (like an inch or two). Yes, Vivitar, the off-brand, used other makers to make their lenses. They even used a US company to produce a few types (I think the early mirror lenses). I don't recall seeing many of these 20mm lenses in the day as most amateurs wanted lenses in the telephoto range.

Soligor was also one of my favorites. A wide range of types were offered in just about anyone's lens mount. The optics were quite good but the construction was a bit on the flimsy side. So what? If you cared for it normally, it would last forever. Most have. But against the snobbiness of the legendary Nikkor durability, Soligors appeared delicate. Soligor also had some real hidden star lenses. They made this fabulous 200m f/2.8 telephoto that was hundreds of dollars less than a Canon or Nikon that produced very good images. If you find one, nab it.

When it comes to complementing your vintage SLR collection with some lenses, don't overlook older off-brand types. They help to truly represent how older cameras were used by the vast majority of people. I've even heard of some people who collect these older lenses as a stand alone collection. Lenses, too can have mechanical and optical milestones to celebrate.

Choosing an in-house brand such as an Olympus Zuiko or a Konica Hexanon for your camera will never be a wrong move. But there are a few optical gems out there with the name Vivitar or Sigma on them. Go with your gut. If it feels well-built and does not have the name of a major retailer on the filter ring, go with it.
Posted by Jim Eckberg at 8:24 AM