One Good Screw (Thread) Deserves Another

Film cameras that used the old 42mm screw-thread for interchanging lenses always seem to languish at the bottom of collector's hearts. These brands and models seem to be the forever also-rans of cameras, fit only for the unaware collector or unfocused bargain-hunter. For those of us over age 40, cameras that used this mount were generally seen as the cheap alternative to "real" pro cameras that used the more complex bayonet mount (Nikon, Minolta, etc.). Your aunt might fiddle with an old Fujica or Praktica camera, but a serious photographer? Never. Such ego.

Pentax is regarded as the spiritual originator of the mount, even though the German company, Praktica, really was the daddy. Since the mount was just a screw-thread and not really something you could patent easily, the people at Pentax, being savvy marketers, touted that they any other camera manufacturer or lens builder could use "their" mount without copyright infringement or royalty. We came to call it the Pentax mount in the US. In any event, the screw-thread mount (M42) was very successful, with may Asian and European makers offering a wide range of camera models by the late-1960's. You could find M42 lenses in any camera shop, some at real bargains. The mount came to be as the "universal screw-thread" for good reason, they were widely and wildly, popular. 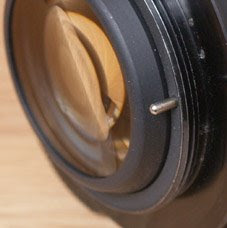 The 42mm screw-thread mount was a paragon of simplicity. Easy to machine into metal, hardy in service and boringly reliable, the mount was a favorite of off-brand lens makers such as Soligor, Vivitar, Tokina and others because it was the least expensive type to manufacture. The only apparatus required might have been a stop-down pin on the inside of the thread. This would push in and close the diaphragm as the shutter was released.

The mount did have its fatal shortcomings. The screw mount was fine in the days when people carried around a separate light-meter to determine exposure and transferred the settings to the camera. Once cameras evolved internal light metering capabilities, the M42 mount couldn't handle the extra linkages between the f-stop and camera body. And after electronic and autofocus cameras came around, the M42 mount was hopelessly antiquated by the early 1980's. Pentax updated the mount to a universal bayonet mount (K-mount) and offered some exceptional models, but even that proved too late as autofocus systems, such as Canon's EOS cameras snapped up market share. 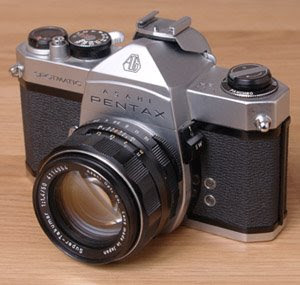 Still, a few cameras exist that every collector should probably have on their shelf, if not right up front. The most obvious is the Pentax Spotmatic. This was the high-water mark for the M42 mount. Sure, there were some stunning trys such as the Pentax ES, Fujica ST901 and others. These offered shutter-speed priority automation. Quite a stretch for the old mount and some mount inconsistencies cropped up between manufacturers. So much for the universal mount.

The Spotmatic had a great silky feel to the body, controls were basic but located where most hands would expect to find them. The Spotmatics were the first to offer an internal meter which measured the light coming through the lens and not from a meter on the body somewhere pointing hopefully to the same spot. The 1/1000th shutter speed for the cloth shutter was speedy in its day and endeared the camera to sport photographers.

A Spotmatic (plain or the "F" model) is a really well-built device. Kudos to the Pentax people from the 21st-century. You can find Spotmatics nearly anywhere from online auctions to your local thrift store. Millions of these suckers were made, and I'll bet more than half are still serviceable. But the thing that people bought Spotmatics for were the Pentax lenses. They were spectacular. With multi-coatings and a careful manufacturing process, Pentax lenses were on par with the best Leica, Nikon and Canon had to offer. The build of the lenses was first-rate. Not many lenses focused with the smoothness or snap of a Super Multi-Coated Takumar, Pentax's brand-name for its lenses. Pentax offered a staggering variety of lenses from fish-eye to super-telephoto. Many were among the fastest on the market.

Alas, because of that universal mount, most people bought the Spotmatic body and outfitted it with a cheaper Soligor or other off-brand lens. Too bad. If you can find a Pentax lens from this era today, it's kinda rare. The only people who seemed to buy the real brand back then were military types, universities and other public institutions. As such, these examples are well-worn and usually adorned with deeply scribed inventory markings. 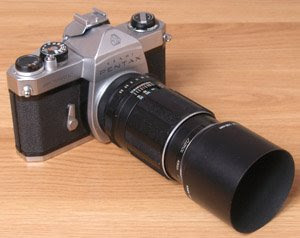 I have a Pentax 135mm f/3.5 and a 35mm f/3.5 (very slow for its day). These are early examples, made during the prime years of Pentax's domination of the sub-pro camera market in the late 1960's. I've shot a roll of film through them and have found the results nostagic and pleasing. The physical size of these lenses is even smaller than my Olympus OM Zuikos, yet they still fall into your fingers naturally. But the build! Wow, it's satisfying just to sit around and focus them. The screw-thread is still slower to couple and uncouple, which is why many pros of the day shied away from the mount.

The usual comparison to "how bad things are made now-a-days" fits. It would be nearly impossible to offer lenses of this careful manufacturing in today's world. You can feel the brass and glass weight in them. Forty years later and they still work wonderfully.

So, I've gone from not really being a screw-thread camera collector to someone actively seeking a few more examples. Pentax lenses that is. I know there must be a few more out there. That's the way with Pentax, they were never anyone's true first-choice builder. They had to grow on you. Well, I'm hooked. Time to clear some space on the shelf and prepare to get screwed again.
Posted by Jim Eckberg at 7:09 PM