Found this in an antique store on sale for $9. Was going to pass on it until I picked it up. The Hollywood Reflex is a metal-bodied camera with an interesting mix of substantial metal parts that don’t function, coupled with cheap stamped/bent sheetmetal parts that are functional. The camera used 620 format rollfim to take images. A look inside the film chamber indicates an affiliation with Ansco for the choice of film you should use in it. 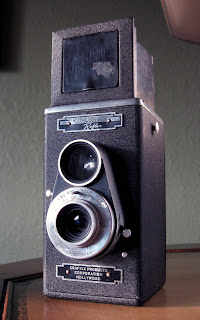 Also known as the Hollywood Sportsman, the Hollywood Reflex/Hollywood Sportsman was manufactured in – amazingly – Hollywood, California. From some reading, it appears this camera was made in the late 1940’s, most likely 1947. Although it looks like a twin lens reflex (TLR), it’ doesn’t focus the viewing lens, only the taking lens. This is similar to other American-made cameras, such as the Argus 40.
The lens is indicated on the bezel of the taking lens to be an 80mm Achromat; a fancy way of saying the lens is marginally better than one that’s not there at all. You have a choice of two f-stops: f/11 and f/16. So, this would be an ‘over the shoulder, full sunshine’ type of camera. To set the f-stop, you move a lever on the taking lens.

As for shutter speeds, you get two: ‘Instant’ (about 1/50th), and ‘Time’ (shutter stays open until you release it. To focus the camera, you merely turn the lens to an estimated distance. A post on the bezel prevents you from unscrewing the lens completely. On my example, the post-stop on the lens is missing and the lens itself focuses far too easily. There seems to be a flash synchronization port just under the shutter release on the front of the camera. I’m not sure what type it is. I’m also not sure why anyone would waste their time using a flash with this camera.

The body of the camera is a hefty cast metal with that crackly paint so popular in the pre- and post-WWII era. To open the back, you push in a large metal button on the bottom of the camera next to the tripod mount. Loading and unloading film is easy with the very open film chamber. The back, however comes completely off when loading film. No problem if you have a helper or are fortunate enough to have the genetic predisposition to have grown a third hand. As with many TLR rollfilm cameras, there’s a red filtered porthole to view the exposure numbers on the film backing as they pass by. No double-exposure prevention mechanism came with the camera.

The viewfinder has the pop-up metal shrouds to improve viewing that most TLRs came with. The view is still very dark inside with the camera’s ground-glass screen. As a bonus, you can flip up a visor on the front of the viewfinder cover and view your subject by eyeballing your composition from the back of the finder through the front. Again, this was typical of most TLR cameras of the time.

Even with its many short-comings, the Hollywood Reflex has a certain charm to it that overshadows its committee-looking design and breezy construction style. This was a camera not aimed at any serious kind of photographer. I am very glad to have an example, if for no other reason, it does strongly evoke the feeling of a bye-gone era.
Posted by Jim Eckberg at 10:38 AM