Argus C4R: What Should Have Been

I never really liked Argus cameras until very recently. I had always considered the brand a distant "also-ran" to German, Japanese and even home-grown Kodak examples. The designs of the Argus C3 and others were just too clumsy and industrial looking for my tastes.

That's all changed. Argus cameras offer something very alluring to a collector like me; infinite variety in same models. Argus was known for making slight, but often not useful, changes in their long-running lines of products.

I've gone from no Argus models on my shelves to over a dozen in about a year. More are targeted for acquisition.

The Argus C4, made from about 1951 to 1957 was a popular model with a sleeker look than its sister camera, the boxy C3 often referred to (with reverence) as the "brick" (for good reason). The C4 was a complete departure in design from earlier models. Where the C3 was all-black and had a decidedly 1930's look, the C4 typified a brash new 1950's industrial design style based loosely on contemporary aircraft styles of the day - the most advanced technology for that age.

With its cast aluminum body and parts, it reeked of post-WWII American industry. Inside the metal body however, Argus continued to cut corners to compete on price. The shutter tripping mechanism is famously delicate, interior parts are prone to corrosion, and that aircraft aluminum dented and bent far too easily.
The C4 did have a good f/2.8 Cintagon lens, a formula copy of earlier German designs. The manufacturing capabilities of Argus did not permit a high degree of precision, and management did not seem to care as they marketed their cameras to snap-shooters and not professionals. In other respects, the C4 fell short in features. Knobs for advancing and rewinding film were large and easy to use, but these operations had become out of date as the 1950's wore on. 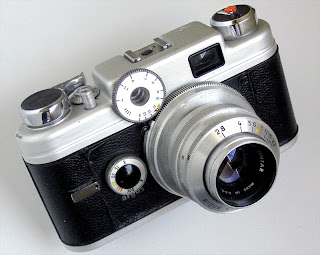 The answer was the Argus C4R in 1958. Almost part-for-part the same camera, Argus made a face-lift on the C4 by adding a ratcheted film advance wind lever, a pop-up rewind knob and the ability to mount an Argus light meter to the front of the body and have it coupled to the front-mounted shutter dial. The new parts sported chrome finish in place of the former unpolished aluminum, no doubt following the lead of automotive manufacturers with their wildly popular chrome treatments to their products.
The C4R was where the C4 should have been about five years earlier. A case of just right, too late. Other cameras from around the world already had designs with even more features than the C4R could offer. Argus discontinued the C4R after only one year. They returned to producing C3 brick cameras and rolled-out the Autronic, an even larger, boxier version of the C3 with automated exposure control.

The C4R did have a sister camera for 1958, a similarly featured C44R camera model which offered interchangeable lenses.

Finding a good C4R is hard, as so few were sold. I found the model shown here online. It came withe the film counter wheel missing. No matter, from out of the parts box, I found a replacement off a broken C44 I kept. One flat head screw change and the C4R looked new. (sigh) Yet the shutter is inoperative. Remember that shutter release problem? This model has it. I can wind the film advance, but the shutter link is broken. Too complex and expensive for me to consider repairing.

There is a confident heft to the C4R. It has a solid feel in your hands. The front-mounted shutter speeds are big out of place in comparison to most other cameras of that day, but typically, shutter speeds were mostly set and forgotten; leaving the f/stop to do most of the exposure correction.

The way to spot a C4R in online auction photos is to look for the tell-tale red pop-up rewind lever. If you see that on either a C4 or C44-looking camera, you've got one of the elusive 1958 models. I won't use the word rare for these cameras. Argus typically made products in very large lots for huge groups of consumers. But a C4R in your collection offers a bit of uniqueness to a collection of Argus cameras.
Email Post