Long ago, a friend of my dad's found out I was interested in photography. He was an avid snap-shooter, armed with an enormous Rolleiflex and flashbulbs that was ever the ready to capture whatever he and his wife were doing; no matter how commonplace. As he aged, he decided to rid himself of some items he no longer used or could use. The Rollei went to family (as it should). He presented me with a dozen or so old Modern Photography and Popular Photography magazines from the early 1960's. I couldn't have been more pleased (unless it had been the Rollei).

I poured over those publications, enjoying viewing a window on the state of the industry from 'way back. It was fun to read about what the editors of those magazines had to say about upcoming new photo technologies and trends in photography. Most were fairly accurate, but many were wildly wrong. I still have the magazines, fraying and finger-soiled from much consultation over the years.

The ads from the various companies were great. I like them most. The bulk of them were not done by leading marketing professionals. Profits on camera equipment were slim even then. Big corporate dogs like Kodak, Nikon, Polaroid and Canon had very creative ad insertions, but the rest, um, not so much. In the back pages, there were scads of ad pages for discount photo equipment suppliers. Set in tiny type with blurred line art of camera models, these pages reportedly paid for the printing run of the magazines each month. Nearly all of those companies were located in about a ten-block radius in New York City. No internet, you either called long-distance (not likely) or mailed in your check. How trusting folks were then. (sigh)

Now as I crawl about thrift stores and antique shops in my quest to add more cameras to my collection, I'm always looking for older National Geographic magazines and vintage photo magazines. Partly because I like seeing the old ads, but also because of the important data they store.

Nothing beats information direct from those who actually made the product. I've often seen errors from other collectors regarding specifications. I've made a few myself. The magazine ads help fix a time when the collectible item was available, as well as offer indisputable proof as to what features a camera did or didn't have.

I do not know, but have a feeling there are those of you out there who might collect the ads themselves. I hope so. With so much of the world of chemical photography ending up recycled or tossed-out forever, I think it's important that good information sources should survive. Ads are just one facet of that need.

Here are some ads I happen to like for my own reasons. I hope you enjoy them as well. I'll post some further examples again, stop back and take a look. 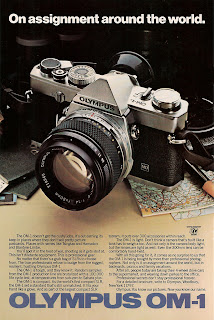 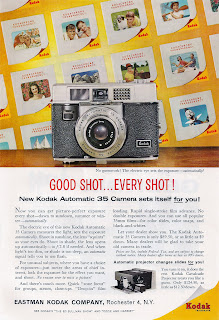