My uncle long ago decided to buy a digital camera to document his granddaughters. He decided that his old 110 instamatic cartridge-type camera should go. He knew of my collecting habit (mania) and dropped over to my house to deliver a small carrying case with his old camera. 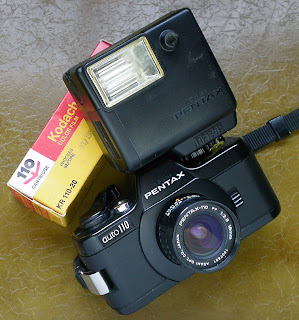 Turns out, he had a Pentax Auto 110 camera, the Pentax flash and two other lenses. Now, I'm not a Pentax fan. Oh, sure, I respect and acknowledge the contributions of this company to photography over many years. They just never hit a chord with me. I have a couple of Spotmatic SLRs and a couple extra lenses. They sit on an honored part of my collection's shelving. But I never run film through them, seldom even look through the viewfinders.

The Pentax Auto 110 has turned me around. What a beauty.

As the Kodak 110 Instamatic cartridge craze was ending in the late 1970's, Pentax came out with what must surely be the most amazing compact camera ever built. The Auto 110 is a jewel. A true SLR with through-the-lens metering done in miniature, it measures only about 3-1/2 inches long! A camera, flash and two lenses could easily fit in your right hand. While entirely plastic, it still manages to feel tight and well-built. I can only imagine the difficulty in manufacturing something this small. Even a millimeter of misalignment and the camera is worthless. Hats off to Pentax; bravo.

You only got automatic control over the camera at this small size, but who cared? The point to Instamatics was ease of use, not fiddling with controls. All you get is a shutter button and a wind lever.

My model came with a 18mm f/2.8 Pan Focus wide angle lens. Like it sounds, no focusing required. Point-and-shoot. The 18mm format converts somewhat similarly as an APS format digital camera's lenses do. So this would be around a 35mm wide-angle on a regular 35mm camera.

The two lenses I also received (with their original bubble cases) include a 70mm f/2.8 telephoto (about a 135mm on a 35), and a marvelous 20-40mm f/2.8 zoom (40mm-80mm). All lenses have a bayonet mount that's only about 20mm across. There's a metal baffle inside the lens mount and you can just make out the tiny mirror inside. The word "cute" creeps into any description of parts of this camera. 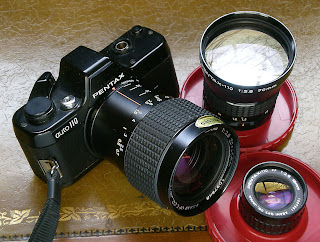 The Pentax flash is equally small. It has its own screw-thread mount to the camera. This nails it down securely to the body. The controls are equally spare. On and off. That's all.

I'm not sure if I'll ever shoot film in this camera. 110 film is rare to find and harder still to get processed. That's too bad. It always seems that just when Kodak ditches a new film format, the manufacturers get it all together. With modern film technology, this camera could, should produce very fine images.

Until I can work out some shooting arrangement, this camera now occupies a prominent place on my shelves of camera wonder. It has also turned may opinion of the Pentax line around.

Now, you'll have to excuse me, I'm going to look for the little motor winder Pentax made for this camera. I'll be happily searching the internet till late at night. Happy collecting!
Email Post
Labels: Instamatci Pentax Auto 110