The Canon F-1: I Find My Valentine

OK, I used to sell cameras back in the late 1970's. Paid my way through college. I worked in this drug store in my small(ish) hometown in the upper-Midwest. The drug store was more of a wonderous Turkish Bazaar marketplace than a counter where you got your medications. We sold everything and anything that anyone wanted. Loved working there, great memories.

Our camera department rivaled camera stores in major cities. We sold photo equipment across several states and were the destination for hundreds of die-hard photo fans. If you wanted an Instamatic or a Leica, we had it in stock and at a good price.

While sales were slow, usually before closing time, I got the opportunity to fondle equipment from almost every brand. I thought of this as my product knowledge time, but really it was just playing.

A couple of cameras were the first to get their springs wound and shutters released. I liked the sound of a Konica SLR's shutter. Had a crisp sound that actually seemed to convey a sense of confidence in your choice of their stuff. Then I'd play with the Olympus stuff. Still like the compactness and generous viewfinder images of OM series equipment.

I left the Leicas completely alone as people who bought that kind of equipment - doctors and such affluent types - had a strong desire to own cameras untouched and unobtainable by simple folk, including sales clerks at camera stores. You could look, but don't touch unless you were selling one. 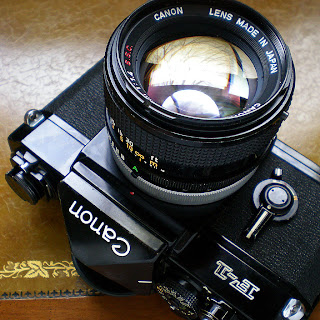 My hands ended up holding a Canon F-1 most of the time. It was the professional camera response to the big Nikons back in the day. Nikon always had the market on swagger and overbuilt brass cameras. Owned it. Canon had some innovative new ideas for pros. The Canon FTB could not match what pros wanted from Canon. Their response was to build the F-1, a rock-solid instrument with an integrated system of accessories.

They started by putting the light meter in the camera body, not the finder. Go look at old Nikon F Ftn finders and you'll see just how big a prism could be (and weigh). Even with the Nikon F2, the successor to the F during the Canon F-1's reign, Nikon just didn't get it. Those Nikon F2 finders were huge, too. Pros learned to live with the extra weight and size, maybe they even liked the "big boy" look of them, who knows?

Canon then spend considerable time and resources to improve their lens line. The result were optics that were as good or better than Nikon's. Still, the folks at Nippon Kogaku (Nikon) held Canon back from universal acceptance by the professionals of the world. That all changed when the revolutionary Canon EOS autofocus systems arrived. That's another story.

I loved those F-1s. Wanted one, badly. But they required far too much cash from a college student's camera counter commissions. I had credits and books to pay for.

Today, Valentine's Day, I sold a camera from a listing on Craig's List in another town. I had some extra time after the sale before I drove home, so I stopped in one of my favorite used camera haunts. Saw a beaten-up old Canon F-1 for $100. Just sitting there. Ignored. People scurried about next to me, fretting about which of the cookie-cutter black digital cameras would be the best to buy.

I asked the clerk if I could see the F-1. He lifted the body off the glass shelf from the counter in front of me, blew off some dust (thank you for helping to keep the flu season alive, sir) and handed it to me. Suddenly I was back in 1979. It felt . . . perfect. Closing time is coming up soon and I'm a kid playing with stuff I couldn't afford.

This example had just enough brass showing through the paint to let you know this guy was used by a pro to keep bread on the table. Not too many scratches or gouges to let you know they cared for this when they owned it. The meter worked fine, no wrinkles on the shutter blades and the view in the finder was sharp and clear. Sold.

I knew I had a 50mm FD-mount Canon lens at home; I did the deal and walked out. So it's Valentine's Day and I'm in love all over again. The years show on both the camera and me, but in my eyes, the F-1 is still young and good-looking.
Posted by Jim Eckberg at 3:16 PM